Tour de France Cyclist Cyril Gautier Proposes to His Girlfriend on Live TV During the Last Leg of 2,500-Mile Race

On Sunday, after 21 days and 2,500 grueling miles, British road racing cyclist Chris Froome got to hold aloft the coveted Tour de France trophy — but Frenchman Cyril Gautier got the girl.

About 20km into the race's last leg into Paris, the 29-year-old Gautier called over to a motorcycle cameraman who was able to capture a very special moment when the rider revealed a handwritten note scrawled in thick black marker. Written on a page ripped from the spiral-bound official route profile was the French phrase, "Caroline, Veux tu m'épouser? Je t'aime," which translates to “Caroline, Will you marry me? I love you.” The note was punctuated by a large heart. 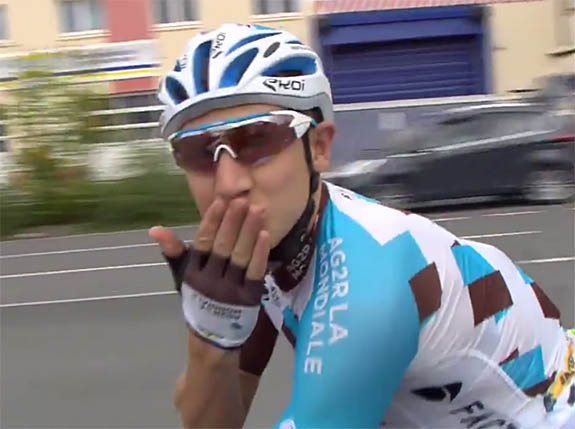 The jubilant Gautier, wearing his team's blue, brown and white colors, then blew a kiss into the camera, presumably directed at his girlfriend.

At that moment, fellow Frenchman Pierre Rolland rode alongside Gautier and shouted, "Dis oui! Dis oui," which means "Say yes! Say yes!” Dressed in bright green gear, Rolland, who obviously knew in advance of Gautier's proposal plan, smiled at the camera, released his handle bars and shaped a heart with his fingers.

While Gautier's proposal to his long-time girlfriend was seen in real time, curious viewers didn't know Caroline's response until a few hours later.

Gautier, who is a member of the AG2R La Mondiale team, finished his eighth Tour de France Sunday evening in a respectable 48th place. For much of the race he had helped secure a top-three finish for his teammate Romaine Bardet. The three-week race covers challenging terrain in France, Belgium, Italy, Germany, Spain and Switzerland, and ends at the Avenue des Champs-Élysées in Paris.

If you're wondering how a cyclist could manage to pull off a proposal in the middle of a race, the answer is that the last leg of the Tour de France is largely ceremonial. The eventual winner usually has amassed an unsurmountable lead during the previous legs, so the "racing" on the final day is less intense. The racers will not challenge the leader in deference to the previous weeks' accomplishments.

Gautier's memorable racing proposal went down in less than 20 seconds. Check out the video here...