Twittersphere Buzz: Volcano Is Raining Green Gemstones on Hawaii… Or Is It?

The Twittersphere was abuzz last week with the bitter-sweet story of how the destructive and horrifying volcanic eruptions of Kilauea were raining tiny green gemstones on the Big Island of Hawaii. 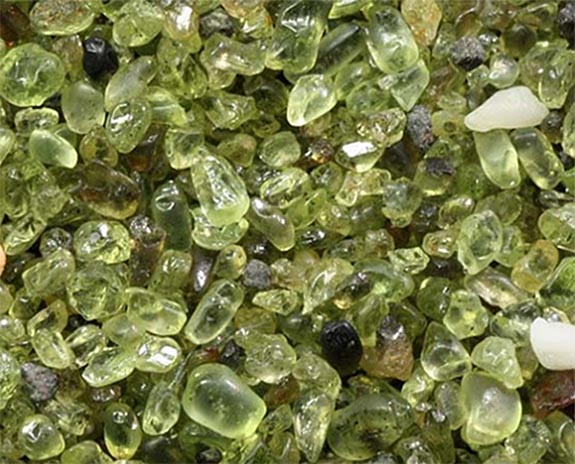 On Monday, June 11, Twitter user @ErinJordan_WX wrote, “Friends of mine live in Hawaii, right next to the area impacted by the most recent lava flows. In the midst of the destruction nearby & stress of the unknown, they woke up to this — tiny pieces of olivine all over the ground. It is literally raining gems. Nature is truly amazing.”

Within days, major media outlets breathlessly reported that “Hawaii’s volcano is literally erupting gems.” They explained how olivine — the non-gemstone variety of the August birthstone peridot — is a common mineral component of Hawaiian lavas and one of the first crystals to form as magma cools.

These outlets explained the raining-gemstone phenomenon this way: “As the volcano erupts, it blasts apart molten lava, allowing for green olivine minerals to be separated from the rest of the melt and fall as tiny gemstones.”

Later in the week, however, other outlets questioned how large gobs of molten lava would instantaneously release the olivine crystals into the air.

Cheryl Gansecki, a geologist at the University of Hawaii at Hilo, told sputniknews.com that the green gems seen in the photos circulating online do not separate from the lava themselves and had likely come out during past eruptions.

“There is not olivine raining from the sky, except in clumps of lava. If you happen to be where tephra is falling from the sky, there [are] tiny olivines embedded in it, but you probably aren’t going to see them,” she said.

Natives of Hawaii’s Big Island are well aware of the association between olivine and volcanoes.

Mahana Beach on Hawaii’s Papakolea coast, for example, is one of only three green sand beaches in the world. The abundance of olivine crystals filling the beach comes from the eroded cutaway interior of Pu’u Mahana, a volcanic cone produced more than 49,000 years ago by the explosive combination of lava and groundwater. 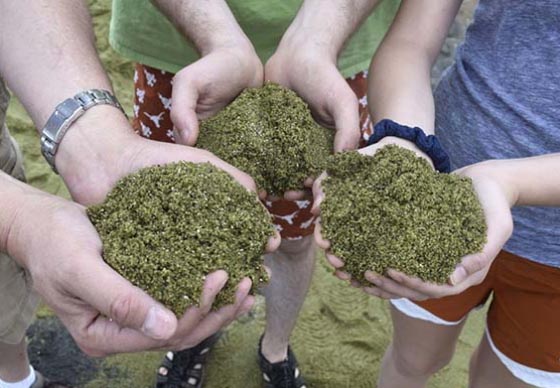 Locals have an affection for peridot and refer to the gemstone as the “Hawaiian Diamond.” Small peridot stones are sold as “Pele’s tears” in honor of Pele, the goddess of volcanoes. In ancient Hawaiian chants, Pele was described as “She-who-shapes-the-sacred-land,” and her temper was known to be both as abundant and dangerous as the lava.

The latest eruption of Kilauea, one of the most active volcanoes in the world, began in early May and has since destroyed as many as 600 homes on the island.